The Community Moth-up aims to educate Londoners about Lymantria dispar dispar (LDD moth) through a communications campaign and moth-up events.

The Community Moth-Up is an event and communications campaign to raise awareness about the invasive moth species Lymantria dispar dispar, also known as LDD moth and formerly known as the European Gypsy Moth. This project aims to educate Londoners and empower them to take hold of the moth invasion.

LONDON, ON – As a part of the London Environmental Network’s Environmental Action Incubator program (EAI), the Community Moth-up encourages people to do their part to control Lymantria dispar dispar (LDD moth) to save trees, support additional tree planting in the community, and reduce carbon emissions in the local area.

“This initiative is all about awareness; making Londoners aware of how this invasive moth species is contributing to the decline of our native tree population,” says Fatima Abbas, project leader of the Community Moth-up. 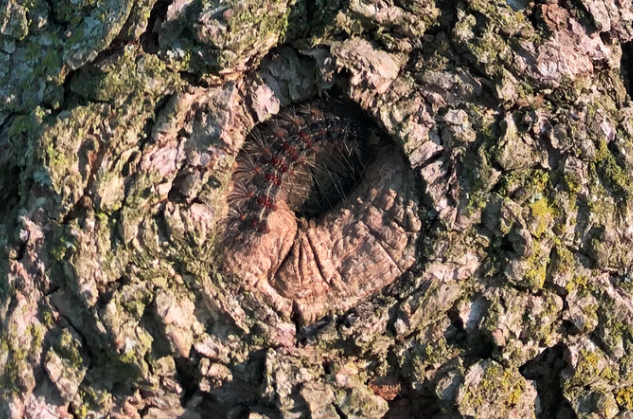 LDD moth nestling within the bark of a tree.

Throughout the fall, Community Moth-up events will be held where small groups will be instructed to remove egg masses on trees in parks and ESAs within London and the surrounding area. Participants will be able to perform various removal techniques for the LDD moth, including burlap banding and egg scraping. These events are in collaboration with environmental groups including ReForest London, Upper Thames River Conservation  Authority, Friends of Kilally Meadows ESA, and the City of London’s Urban Forestry Department.

“Through burlapping and egg scraping events, Londoners will learn to identify the LDD caterpillar and work together as a community to remove this pest,” explains Abbas. “The short-term impact will be a reduction in live caterpillars next spring. More importantly, a great education campaign will empower Londoners to remove caterpillars and egg masses from their own backyards, schools, city streets and community parks.”

Implementing efforts to protect trees and reduce carbon emissions that benefit the health of our environment and community are needed now more than ever. The Community Moth-up is a great example of an initiative that spreads public awareness on the LDD moth and how we can protect urban trees in London. We encourage you to get involved by participating in a Community Moth-up event and taking part in egg scraping from late August to April. Stay tuned for more information on upcoming group cleanups and tree pest management kits that will be available by visiting the Community Moth-Up web page.

GET INVOLVED - To learn more about the Community Moth-up and other EAI projects, visit our website and social media platforms for project summaries, updates, and contact information. With support, these projects will be able to reach Londoners of all ages as we strive to create a greener and more resilient city to live in. If you have an idea for a project that reduces emissions, enhances waterways, and reduces waste, stay tuned for the 2022 EAI applications to open up!