YES! Presents 'An Ecological Civilization: The Path We're On' 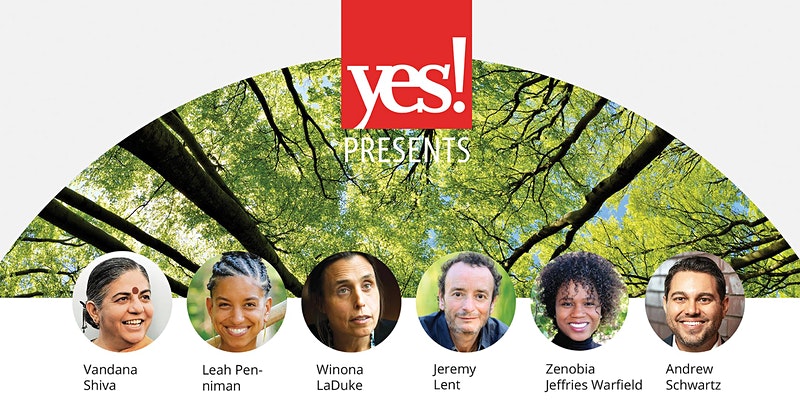 The path toward an ecological civilization moves us from an uncivilized society based on selfish wealth accumulation to one that is community-oriented and life-affirming. You’re invited to join us for a virtual conversation on the ways communities are already working toward that goal—and how you can be a part of it.

This event features contributors to our upcoming issue of YES! Magazine, "An Ecological Civilization"—Vandana Shiva, Leah Penniman, Winona LaDuke, and Jeremy Lent—and will be facilitated by YES! executive editor Zenobia Jeffries Warfield and Andrew Schwartz, co-founder and executive vice president of the Institute for Ecological Civilization. Reserve your seat now!

Vandana Shiva is a scholar, author, and activist. Her pioneering work around food sovereignty, traditional agriculture, and women’s rights has shifted how the world views these issues. She has received numerous awards and honors for her work and has authored more than 20 books, including Reclaiming the Commons: Biodiversity, Indigenous Knowledge, and the Rights of Mother Earth. She currently lives between Delhi and Dehradun, Uttaranchal at Navdanya, a women-led organic farm, school, and café she founded that promotes justice for Earth and all living beings through agroecology and seed freedom.

Leah Penniman is a farmer, educator, author, and food sovereignty activist. Penniman is co-founder and program manager of Soul Fire Farm, in Grafton, New York. The farm's mission is to end racism and injustice in the food system and by reclaiming the inherent right to belong to the earth and to have agency in the food system as Black and Brown people. The farm's flagship program is the Black Latinx Farmers Immersion course to train beginner farmers. She is the author of Farming While Black and the upcoming book Black Earth Wisdom.

Winona LaDuke is an internationally renowned environmentalist, economist, author, and industrial hemp grower. She is executive director of Honor The Earth and founder of the White Earth Land Recovery Project and is known for her work on tribal land claims and sustainable tribal economies. She is an enrolled member of the Mississippi Band Anishinaabeg of the White Earth Nation in northern Minnesota. In 1996 and 2000, she was the Green Party’s vice presidential candidate. Her books include Last Standing Woman, All Our Relations and In the Sugarbush. LaDuke is a YES! contributing editor.

Jeremy Lent is an author whose writings investigate the patterns of thought that have led our civilization to its current existential crisis. His recent book, The Patterning Instinct: A Cultural History of Humanity’s Search for Meaning, explores the way humans have made meaning of the cosmos from hunter-gatherer times to the present day. He is founder of the nonprofit Liology Institute, dedicated to fostering an integrated worldview that could enable humanity to thrive sustainably on Earth. His upcoming book is The Web of Meaning: Integrating Science and Traditional Wisdom to Find Our Place in the Universe.

Zenobia Jeffries Warfield is the executive editor at YES! Media, and has been in media going on 15 years. An award-winning journalist, she honed her skills as a reporter, managing editor, and editor for nearly eight years at a community newspaper in her hometown of Detroit. She joined the YES! editorial team in 2016 as an associate editor charged with building and growing YES!’s racial justice beat. In addition to writing and editing, she has produced, directed, and edited a variety of short documentaries spotlighting community movements to international democracy. Zenobia directs editorial coverage for YES! Magazine, YES! Media’s editorial partnerships, and serves as chair of the YES! Equity, Diversity, and Inclusion Committee.

Wm. Andrew Schwartz is a scholar, organizer, and social entrepreneur. He is Executive Director of the Center for Process Studies and Assistant Professor of Process Studies & Comparative Theology with Claremont School of Theology at Willamette University, as well as Co-Founder and Executive Vice President of the Institute for Ecological Civilization. He is Affiliated Faculty with the Sustainability Institute at Willamette University. His current work includes comparative religious philosophy, as well as systems change and the role of big ideas in the transition toward ecological civilization.

YES! Presents is a live event series from the team behind YES! Magazine that brings to life stories of solutions to some of society’s biggest issues. From deep explorations based on YES!’s award-winning solutions journalism reporting, to discussions with some of the most influential national and local figures at the forefront of these solutions, YES! Presents events offer a thought-provoking look into the role we all play in building a better world. Headquartered in Washington state, YES! Media is a national nonprofit, independent publisher of solutions journalism. Through rigorous reporting on the positive ways communities are responding to social problems and insightful commentary that sparks constructive discourse, YES! inspires people to build a more just, sustainable, and compassionate world.