What are algal blooms and what can we do about them?

What are algal blooms and what can we do about them?

What is the algal bloom problem?

In local lakes and waterways, there is a very high chance you have seen algae before. While this isn’t a bad thing on its own, too much algae can become dangerous to wildlife and aquatic health. Too much algae is what we call an algal bloom (or the process of eutrophication). Harmful algal blooms (HABs) happen when there is an increased amount of algal growth.

White phosphorus and phosphate (found in fertilizer) is a leading cause of algal overgrowth, as it has certain nutrients that plants need to grow. As the phosphorus causes this, the now overgrown algae can become known as an algal bloom, and consumes too much oxygen putting wildlife at risk. This means if the bloom is toxic and continues to spread, it can harm our environment in many ways. In the Southwestern Ontario and the London area, as garbage and phosphorus find their way into Deshkan Ziibi (the Thames River), the bloom typically begins when these contaminants reach the Lower Thames River in Chatham-Kent, which has more farmland.

In the summer, when there’s more sunlight to “feed” them, algal blooms tend to come out more. This turns the water into a more green-ish colour. When this happens, it causes harm to wildlife and the water itself, which can also impact certain companies. Companies providing tourism services can lose a fair amount of money to HABs.

What is there to know about algal blooms?

Algal blooms can be harmful, but there are also non-toxic algal blooms. It has not been determined what makes an algal bloom an HAB or a non-toxic bloom, so it’s especially important to be careful about blooms in general.

In order for a bloom to be toxic, it has to be able to produce toxins. Toxins are a harmful substance that is produced inside a living cell. These toxins can spread throughout any type of bloom (red, brown, and green). All three of these blooms have many similarities and differences.

Red algal blooms (more commonly known as red tide) is basically just your standard HAB, as red tides and HABs are merely synonyms for each other.

Brown algal blooms are blooms caused by an excess of silicate in the given body of water, where a type of algae called “diatoms” thrive. These blooms often occur in fish tanks, and more information on why they might be there can be found at fishlab.com.

Green algae blooms (caused by blue-green algae and/or cyanobacteria) is the final (and also quite common) type, as blue-green algae can be very dangerous to human and animal life. It is crucial that dogs do not drink or swim in waterways containing algae, as it can impact their health (the same applies to cattle in specific conditions). Birds such as ducks or geese also face a danger with potential for having to face avian botulism, as it is a possibility that the toxins for the illness are more fertile in “the presence of cyanobacteria,” according to cdc.gov. And, of course, algal blooms can directly affect fish by reducing the amount of dissolved oxygen for them, making it difficult to breathe with their gills due to the algae.

What is the history of algal blooms in Canada and the U.S.?

Here in London, Ontario, we have Deshkan Ziibi (also known as the Antler River or the Thames River). The London area is considered the Upper Thames River, while the Chatham-Kent area would be the Lower Thames River. Algal blooms in Ontario tend to form from substances like animal waste, and other materials with “bad” elements, usually containing phosphorus, being dumped into waterways. Just garbage in general, even. As this collects and flows down the Thames to Chatham, the agricultural land there tends to finally push it over the edge to an actual algal bloom. There is little information on the factors of what makes a bloom toxic or nontoxic. 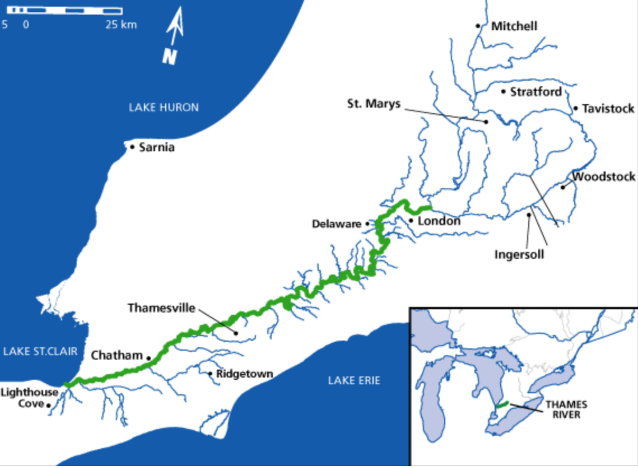 Map of Deshkan Ziibi / the Thames River in London, Ontario.

During the 1960s, Lake Erie was considered a “dead sea”, being full of “factory pollutants and sewer waste,” according to medium.com. Factories in places like Cleveland, Ohio would dump their waste into the lake and other waterways. A river by the name of Cuyahoga caught on fire multiple times because of toxic pollutants. The government at the time was not too concerned. However, due to these pollutants, harmful chemical levels started to increase, which led to the appearance of algal blooms in Lake Erie. This killed many fish, as the blooms would deplete the oxygen in the body of water.

April 15th, 1972 marks the date of which the Great Lakes Water Quality Agreement (GLWQA) was signed by Prime Minister Pierre Trudeau and President Richard Nixon. Its purpose is to keep an agreement between the USA and Canada to protect their shared waterways. The GLWQA was updated in 2012 (you can view the original GLWQA of 1972 here). On October 18th later that year, the Clean Water Act was signed. Its purpose? To create stricter regulations regarding dumping and to pretty much bring eutrophication in general to a halt.

How are we affected?

We know that algal blooms are bad, but how do they directly affect us?

The city of Toledo in Ohio, USA is a great example of why we should stay alert. In 2014, Lake Erie was largely contaminated with HABs. This left 400,000 people in Toledo without drinking water, 110 of which having already gotten sick due to toxins from the algae. This dangerous period lasted approximately 3 days, where people could not drink their tap water at all. Mayor of Toledo, Wade Kapszukiewicz, stated farm and fertilizer runoff was the main cause, and as the city has done all it could do, farmers need to work hard to make sure they can manage their runoff. 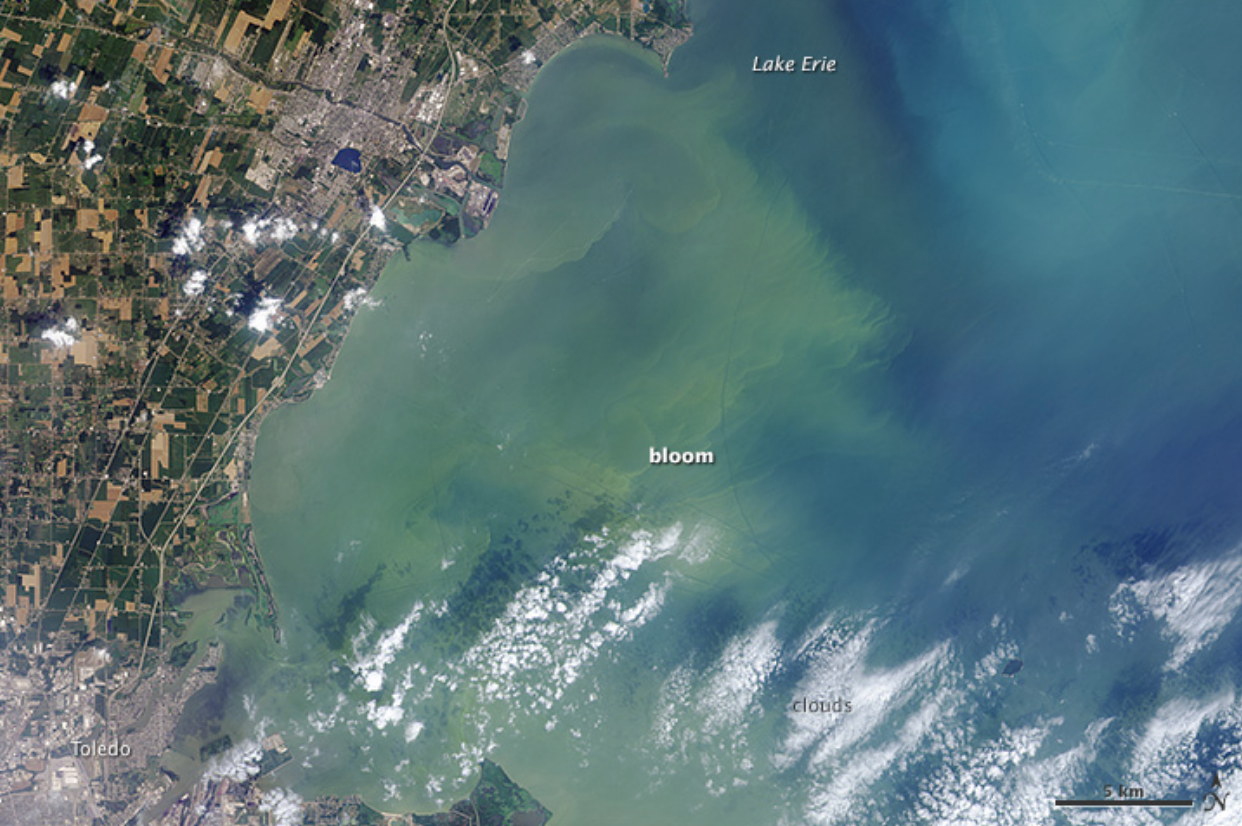 About two years later, residents of Pelee Island, Ontario went through the exact same thing. A year after that, Ohio faced another algal bloom in their Maumee River. And in 2020, there was a toxic bloom in Lake Erie once again! 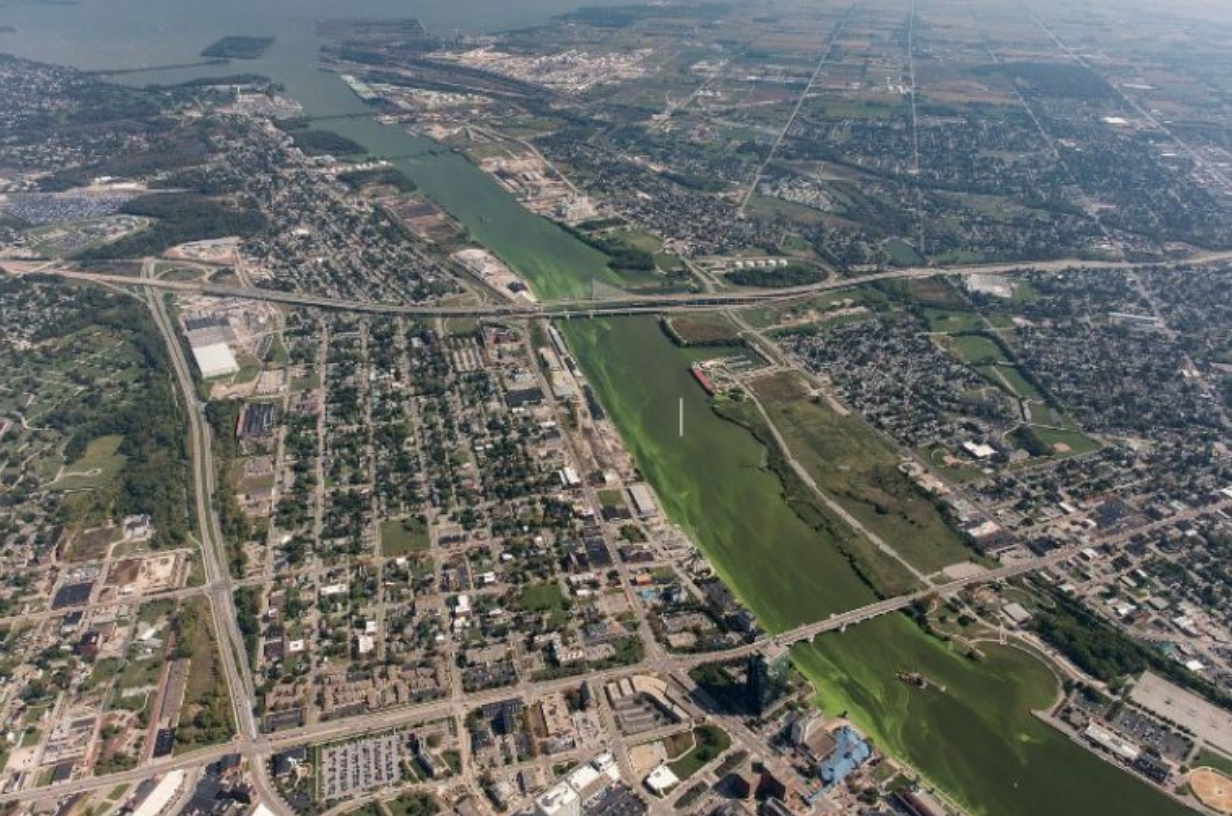 In 2017, another algal bloom occurred in the Maumee River of Ohio.

Algal blooms eventually got to a point in time when they were being recognized and acknowledged. When this happened, our governments started to realize something needed to be done about the issue. One action included in the GLWQA (mentioned earlier) is limiting phosphorus inputs that might cause excess algae growth. Included in this aim, the Canadian government has stated that they hope to have reduced phosphorus loading by 50% by 2025.

What can we do about algal blooms?

Some organizations use phosphorus-free fertilizers and detergents to limit nutrients that may enhance the growth of algal blooms. Also, in 2011, Canada began to ban certain phosphates from being used in detergents. We can prevent the rate of growth of algal blooms by limiting nutrient-rich substances from entering the water, as that can cause algal blooms to start spreading, killing animals, and end up polluting very large chunks of our watersheds.

As said by news.ontario.ca, “Phosphorus enters Lake Erie from many sources, including runoff from agricultural lands, urban centres, sewage treatment plants and septic systems,” meaning that humans really are the biggest cause of algal blooms, and if we stop polluting the waters by the listed causes and just in general, we will start to see a drop in algal bloom levels.

Some things we can do as a community to combat algal blooms is to (for one) not litter, which should be a given. This includes carrying our dogs' waste until we have a place to dispose of it away from anywhere it can cause harm, as it is a big factor of algal blooms’ development. Farmers should also be careful to only apply the amount of phosphorus and fertilizer that is needed, as to not build an excess of which may creep into waterways: it’s important they keep it on the land itself. Farmers can also work with groups like ALUS Middlesex to create natural buffers along their property and waterways to trap runoff before it enters rivers and streams. Cities can seperate their combined sewers and upgrade their sewage facilities top prevent sewage dumping during extreme weather events. And, of course, as mentioned earlier, to make sure you are using phosphorus-free detergents and/or fertilizers whenever possible.