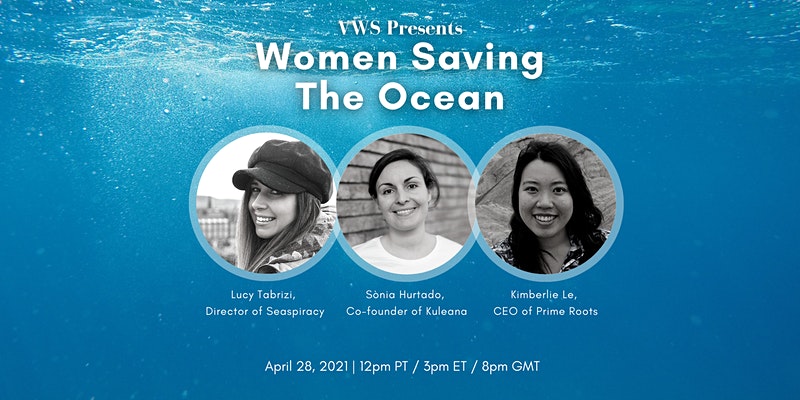 Join us on Wednesday, April 28th for a live conversation with leading women across film and food technology and learn about their fight for ocean preservation. Learn from these women about the state of the ocean, the commercial fishing trade, and how we can create a sustainable future of seafood through innovation.

Hear from a Cross-sector Speakers

Lucy Tabrizi is a UK-based filmmaker. She recently co-directed the Netflix smash hit, Seaspiracy, a documentary chronicling the environmental impacts of commercial fishing, with her husband, Ali Tabrizi. The film reached the top ten most watched films on Netflix over 32 countries, including the US, Ireland, South Africa, and the UK, within the first two days of its release.

Sònia Hurtado is the co-founder and Chief Scientific Officer of Kuleana, a Y-Combinator backed startup focused on plant-based seafood. Based in Barcelona, Spain, Sònia has a MSc in food biotechnology and has worked for more than 15 years in the food industry with a specialization in research and development. Sònia and co-founder, Jacek Prus, founded Kuleana in 2019 with the mission of removing fish from all plates, starting with blue-fin tuna.

Kimberlie Le is the co-founder and CEO of Prime Roots, a startup pioneering koji-based plant-based meat and seafood alternatives. Kimberlie is a scientist-turned-entrepreneur, who has worked in the food industry for ten years. While working as a researcher in molecular toxicology, microbiology, and legal studies at UC Berkeley, she came up with her vision for Prime Roots and the use of koji in alternative protein. She holds a Bachelor of Science in Molecular Toxicology from UC Berkeley. Kimberlie has raised over $18 million for Prime Roots, including funding from True Ventures, Collaborative Fund and IndieBio.