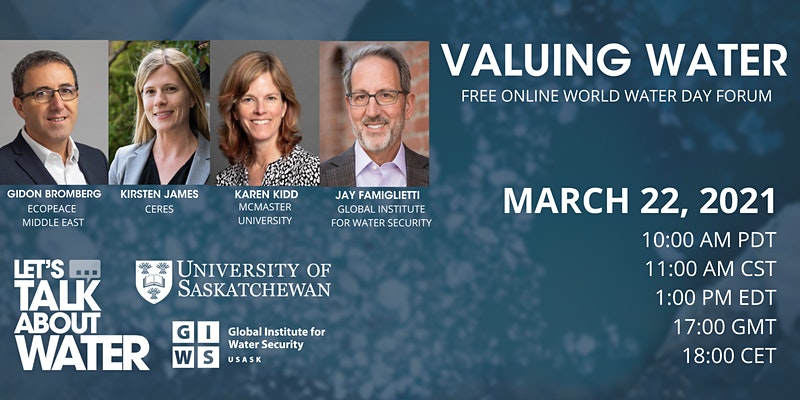 Celebrate World Water Day this March 22nd with our international forum focusing on this year's theme of Valuing Water. Brought to you by Let's Talk About Water and the Global Institute for Water Security at the University of Saskatchewan.

Before moving to Saskatchewan, he served as the Senior Water Scientist at the NASA Jet Propulsion Laboratory at the California Institute of Technology. From 2013 through 2018, he was appointed by Governor Jerry Brown to the California State Water Boards.

Previously, Kirsten served for five years as the Director of California policy and partnerships at Ceres. In that role, she led strategy development for California-focused policy work, engaging companies and investors in support of public policies that call for sustainable water management, clean energy and greenhouse gas emissions reductions in California.

Gidon Bromberg, EcoPeace Middle East
Gidon Bromberg is the Israeli Director of EcoPeace Middle East (formerly Friends of the Earth Middle East). EcoPeace is a regional organization that brings together Jordanian, Palestinian and Israeli environmentalists to promote sustainable development and advance peace efforts in the Middle East. It has offices in Amman, Bethlehem and Tel Aviv, employs 40 paid staff and actively involves hundreds of volunteers.

Bromberg founded the organization under the name of EcoPeace in 1994 and has been the Israeli Director ever since. In 1997, he led the organization's entry into Friends of the Earth International, the largest grassroots environmental organization in the world. He has spearheaded the organization's advocacy campaigns both in Israel and internationally. He developed its particularly notable cross-border community peace-building project "Good Water Neighbors", which is now seen as a model for other programs in conflict areas.

Karen Kidd, McMaster University
Karen Kidd is an Ecotoxicologist, studying how the health of aquatic organisms and food webs are affected by human activities and the fate of pollutants in freshwater ecosystems. She is the Jarislowsky Chair in Environment and Health at McMaster University and previously held a Canada Research Chair in Chemical Contamination of Food Webs from 2004-2017 at the University of New Brunswick. She leads a multidisciplinary research lab at McMaster which includes ecology, biogeochemistry, chemistry, and toxicology - and works on lakes, rivers, wetlands, and coastal zones spanning tropical through Arctic climates.