Take Nature as the Measure: The Search for Sustainability 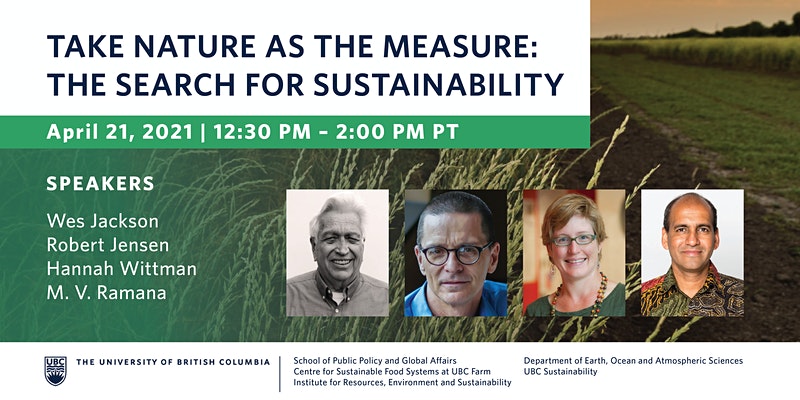 Everyone is welcome. Please register in advance. The Zoom webinar details will be emailed to registrants ahead of time.

Wes Jackson, founder and president emeritus of The Land Institute, earned a bachelor’s degree in biology from Kansas Wesleyan University, Salina; a master’s degree in botany from the University of Kansas, and a doctorate in genetics from North Carolina State University. He established and served as chair of one of the country’s first environmental studies programs at California State University-Sacramento and then returned to his native Kansas to found The Land Institute in 1976. He is the author of several books, including New Roots for Agriculture, Becoming Native to This Place, Consulting the Genius of the Place, and most recently Nature as Measure. Wes is widely recognized as a leader in the international movement for a more sustainable agriculture. He was a Pew Conservation Scholar in 1990, a MacArthur Fellow in 1992, and received the Right Livelihood Award in 2000. Life magazine included him as one of 18 individuals predicted to be among the 100 important Americans of the 20th century. Smithsonian in 2005 included him as one of “35 Who Made a Difference.”

Robert Jensen is an Emeritus Professor in the School of Journalism and Media at the University of Texas in Austin and collaborates with the Ecosphere Studies program at The Land Institute. He is the author of The Restless and Relentless Mind of Wes Jackson: Searching for Sustainability (University Press of Kansas, 2021). His other books include The End of Patriarchy: Radical Feminism for Men (2017); Plain Radical: Living, Loving, and Learning to Leave the Planet Gracefully (2015); Arguing for Our Lives: A User’s Guide to Constructive Dialogue (2013); All My Bones Shake: Seeking a Progressive Path to the Prophetic Voice, (2009); Getting Off: Pornography and the End of Masculinity (2007); The Heart of Whiteness: Confronting Race, Racism and White Privilege (2005); Citizens of the Empire: The Struggle to Claim Our Humanity (2004); and Writing Dissent: Taking Radical Ideas from the Margins to the Mainstream (2001). Jensen is host and associate producer of “Podcast from the Prairie, with Wes Jackson,” and associate producer of the forthcoming documentary film “Prairie Prophecy: The Restless and Relentless Mind of Wes Jackson.” Jensen is co-producer of the documentary film “Abe Osheroff: One Foot in the Grave, the Other Still Dancing” (Media Education Foundation, 2009), which chronicles the life and philosophy of the longtime radical activist.  An extended interview Jensen conducted with Osheroff is online.

M. V. Ramana is Professor and Simons Chair in Disarmament, Global and Human Security at the UBC School of Public Policy and Global Affairs. He is also Director of the Liu Institute for Global Issues, Acting Director (2020-2021) of the Centre for India and South Asia Research in the Institute of Asian Research, and a Scholar at the Peter Wall Institute for Advanced Studies. His research interests are in the broad areas of international security and energy supply, with a particular focus on topics related to nuclear energy and fissile materials that can be used to make nuclear weapons.

Hannah Wittman is a Professor in the Institute of Resources, Environment and Sustainability, and Faculty of Land and Food Systems at the University of British Columbia. She conducts community-based and participatory action research related to food sovereignty, agrarian reform, agroecology, and health equity in Canada and Latin America. She is also co-Specialty Chief editor of the Social Movements, Institutions and Governance section of Frontiers in Sustainable Food Systems. Her edited books include Environment and Citizenship in Latin America: Natures, Subjects and Struggles; Food Sovereignty: Reconnecting Food, Nature and Community, and Food Sovereignty in Canada: Creating Just and Sustainable Food Systems.

Moderator's Bio: Paige Inglis is a student in UBC's Master of Public Policy and Global Affairs. Throughout her studies and thereafter, her focus has always been on environmental aspects of food security and regenerative agriculture. This has involved mostly non-profit work, such as helping new farmers in Ottawa access resources, reduce barriers to entry, and teaching elementary students in Richmond, BC about the food system and how to grow their own food. Paige also has her Permaculture Design Certificate, and has linked it to academic research through field research in Taiwan on Indigenous Ecological Knowledge. No stranger to getting dirty in the field, she has worked on several organic farms and homesteads in Europe, Canada, and Central America. In her career thus far, Paige enjoyed most working with local government partners in advocacy work and there she turned her interest to the power of policy. She hopes to use her policy skills to innovate sustainable food systems locally and globally.