Politics and Prose with Bill Nye 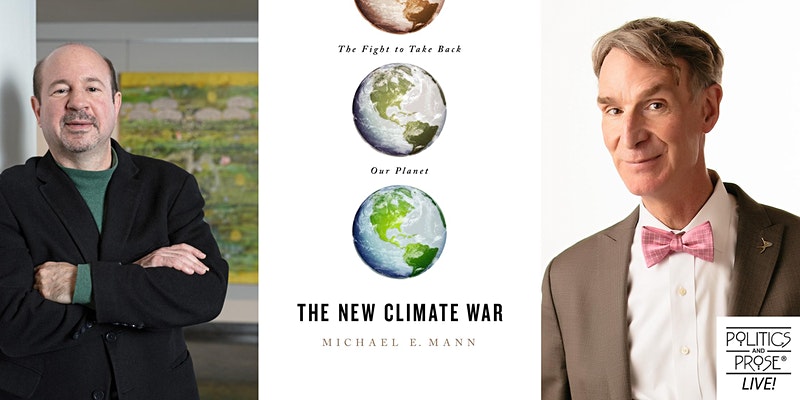 Recycle. Fly less. Eat less meat. These are some of the ways that we've been told can slow climate change. But the inordinate emphasis on individual behavior is the result of a marketing campaign that has succeeded in placing the responsibility for fixing climate change squarely on the shoulders of individuals.

Fossil fuel companies have followed the example of other industries deflecting blame (think "guns don't kill people, people kill people") or greenwashing (think of the beverage industry's "Crying Indian" commercials of the 1970s). Meanwhile, they've blocked efforts to regulate or price carbon emissions, run PR campaigns aimed at discrediting viable alternatives, and have abdicated their responsibility in fixing the problem they've created. The result has been disastrous for our planet.

In The New Climate War, Mann argues that all is not lost. He draws the battle lines between the people and the polluters-fossil fuel companies, right-wing plutocrats, and petrostates. And he outlines a plan for forcing our governments and corporations to wake up and make real change, including:

Michael E. Mann is Distinguished Professor of Atmospheric Science at Penn State, with joint appointments in the Department of Geosciences and the Earth and Environmental Systems Institute. In 2020 he was elected to the U.S. National Academy of Sciences. He is the author of numerous books, including Dire Predictions, Climate Wars, and The Madhouse Effect.

Bill Nye, scientist, engineer, comedian, author, and inventor, is a man with a mission: to help foster a scientifically literate society, to help people everywhere understand and appreciate the science that makes our world work. Making science entertaining and accessible is something Nye has been doing most of his life.