Plight of the Bank Swallow: A Bird Species at Risk in London

A guest post, written by Leanne A. Grieves & Brendon Samuels. Please scroll to the bottom of this article to view and sign the petition to save London, Ontario's Bank Swallows!

Amid the many changes to our daily lives brought on by the global pandemic, 2020 feels very different for most of us. But, for the hundreds of migratory bird species that made their annual return to Canada this spring, this year is business as usual. Sadly, business as usual for birds in the City of London is not looking good.

Once teeming with the natural splendor of the Carolinian Life Zone – the most biodiverse region of Canada –  today’s southern Ontario landscape bears little resemblance to the home these birds used to know. Where their ancestors congregated in huge numbers each year to chase romance, raise families and sustain themselves on the rich bounties of food found here, today, birds in London are struggling to survive within ever-shrinking fragments of their remaining habitat.

Whether bird Species at Risk have a future here in the Forest City will largely depend on decisions we make this decade to preserve their habitat. To truly see, understand and protect these birds, we must tell their story while there is still time to save them.

Envision a world without birds.

In her 1962 book Silent Spring, Rachel Carson invited us to do just this. Carson asked us to imagine the chilling silence that would result if bold steps were not taken to conserve bird populations both globally and in our own backyards. Carson’s environmental advocacy helped light the spark that led to the formation of the Environmental Defense Fund. This was the first major milestone in the campaign against DDT, the toxic pesticide that nearly wiped out beloved birds of prey like the bald eagle. Today, bald eagles have recovered from the brink of extinction, in what is celebrated as one of the most famous conservation success stories in North America.

Bald eagles have recovered, and continued monitoring programs and habitat protections ensure we can track their health and wellbeing. But in the fall of 2019, scientists, conservationists and bird watchers were faced with a series of devastating research publications calling attention to the dire situation for many of the continent’s other bird species. North America has lost 3 billion birds since 1970: nearly 1 in 3 birds have been lost in the past 50 years alone due to human activities.

What’s more, the species we are losing the fastest are important indicators of our shared environment’s health. The 2019 State of Canada’s Birds report found that populations of aerial insectivores – birds that eat insects while in flight (or, “on-the-wing”) – are declining most rapidly. These birds serve multiple critical functions within our ecosystems, yet aerial insectivore species are little known to the public.

Aerial insectivores include birds like flycatchers, swifts, nightjars and swallows. In Canada we have eight swallow species, six of which are regularly found in Ontario. One of these species, the bank swallow, is at particular risk in our province. Bank swallows are one of the most widely distributed birds in the world, but over the past 40 years they have declined by 98% across Canada and by 93% within Ontario. 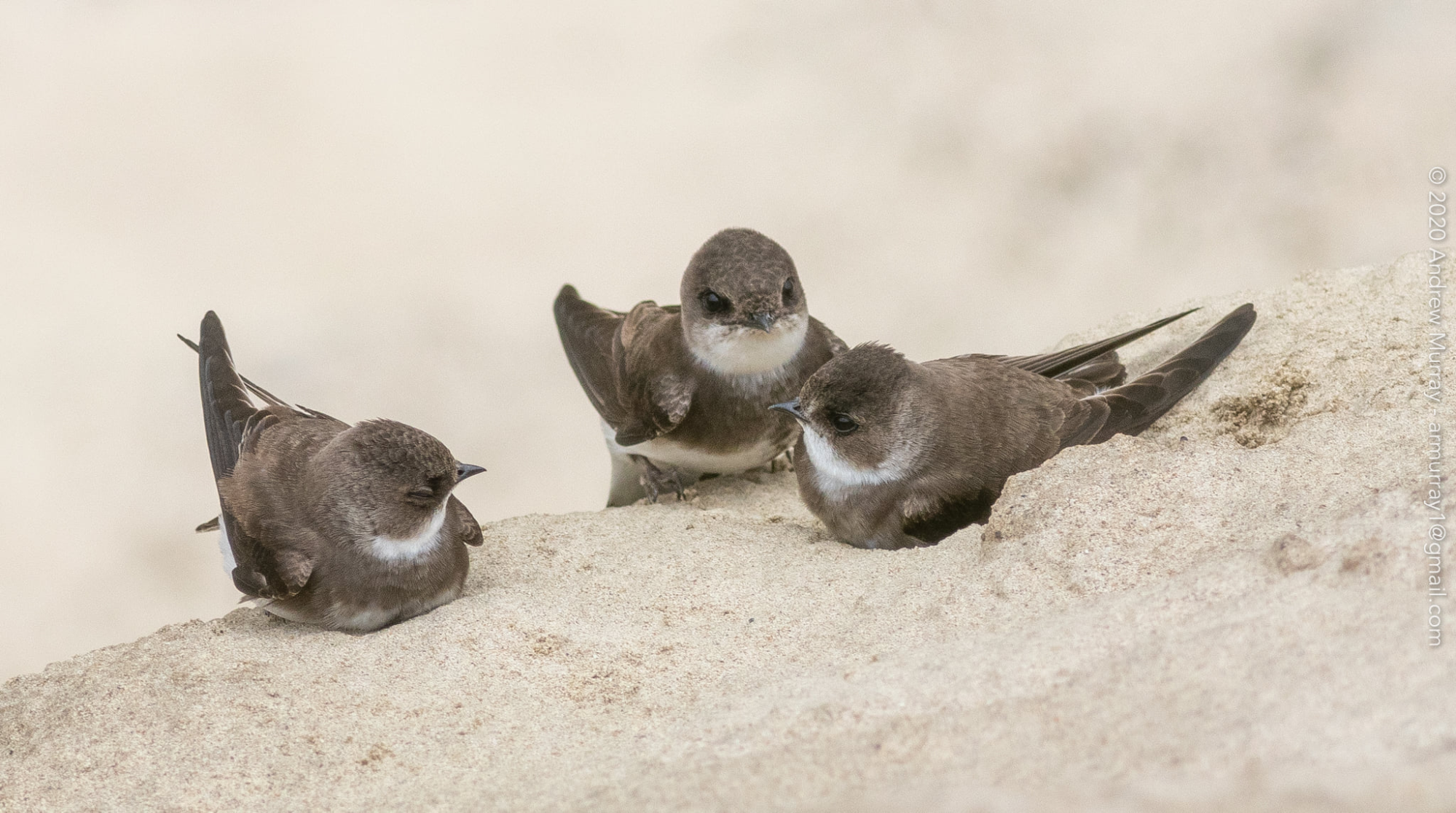 Three young bank swallows resting near their nest burrow. Photo taken at Byron gravel pit in May 2019 by Andrew Murray.

A small, aerodynamic, yet rather plain bird, bank swallows are a rich brown above and white below, featuring a distinctive brown band across the chest. Their song is a soft, rapid jumble of raspy notes. North America’s bank swallows overwinter in the southern United States, Mexico and the Carribean, flying thousands of kilometers each spring to return northward to breed across Canada. Each year, they gather in colonies to painstakingly excavate nest burrows using their tiny feet and beak as well as their wings. During breeding, bank swallows stick close to their nesting colony, foraging for flying insect prey. Swallows can eat 25-50% of their body mass in a day, frequently feeding on human, livestock and agricultural pests, including mosquitoes, horseflies, stable flies and weevils. In other words, these birds provide natural insect control!

In the past, bank swallows were most commonly found around natural bluffs or eroding streamside banks. Today, due to habitat loss caused by urban sprawl, agricultural land use and accelerated erosion, bank swallows are often forced to dig their burrows in human-made sites such as sand and gravel quarries or road cuts. Within Ontario over half of the provincial population of bank swallows now breed in aggregate pits and quarries. This is the story of Ontario’s bank swallows, a bird Species at Risk from whom London’s development has already taken too much. Now, we are inviting the community to help decide how the story’s next chapter will be written.

London’s bank swallows are at risk

In June 2020 a group of concerned citizens, including the authors, made a discovery that generated excitement about bank swallows across the continent: inside the Byron gravel pit in London West there is a thriving breeding colony of bank swallows not previously known to the municipality. Bank swallow colonies range in size from 10 up to 2,000 nest burrows, making the Byron pit colony – with 1,913 counted burrows as of June 9, 2020 – one of the largest in Ontario!

Despite the protected status of bank swallows, the Byron gravel pit is being developed under private ownership into housing complexes and an outdoor recreation area. The City of London has not approved plans for development yet, but preparations at the site have already begun. As of June 26 2020, large machines continue to operate within the immediate vicinity of bank swallow burrows – apparently in direct contravention of the federal government’s guidelines to reduce risk for migratory birds under Canada’s Migratory Bird Convention Act. We have since confirmed that the Ministry of Environment, Conservation and Parks reached out to the developer to ensure best practices are being followed. 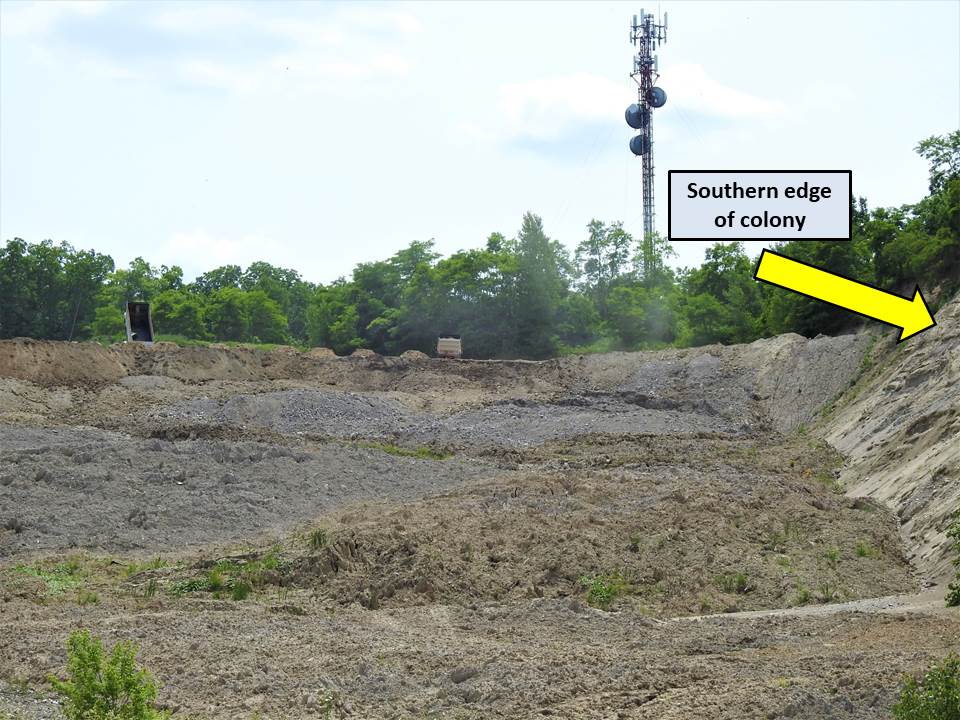 We launched a petition calling on the City of London, the developer and provincial authorities to discuss ways to preserve the bank swallow colony in the Byron gravel pit. In just three weeks the petition collected over 15 000 signatures and garnered responses from Ontario’s nature organizations, the provincial and federal governments, Kate Young (Member of Parliament for London West) and London’s mayor, Ed Holder.

The situation at the Byron gravel pit is complicated by regulations under Aggregate Resources Act that require the aggregate license holder – the company that holds permission to extract granular materials from the site – to “rehabilitate” the pit before planned development can proceed. However, this “rehabilitation” will destroy the cliff face and critical bank swallow nesting habitat along with it. Bank swallow habitat is protected under the Endangered Species Act enforced by the Ministry of Environment, Conservation and Parks, but the Aggregate Resources Act is enforced by the Ministry of Natural Resources and Forestry.

The Mayor and municipal parks planning staff suggested that alternate habitat in the area will be allocated to compensate for the destroyed bank swallow nests. Unfortunately, creating new artificial habitat for bank swallows is not so simple. Attempts to create alternate nesting sites in Ontario have met little to no success, and none come close to accommodating a colony of roughly 2000 birds. To those already familiar with the story of Ontario’s bank swallows, it is abundantly clear that destroying the Byron gravel pit cliff face will cause significant harm to Ontario’s bank swallow population. With 93% of the population already gone, this is a loss we cannot afford to take.

London can spread its wings as a Bird-Friendly City

While the existence of this colony could pose a predicament for the developer, we believe it also presents a unique opportunity for the Byron community that could actually benefit the site owner. The cliff face frequented by bank swallows could become a key feature of the development planned for the Byron pit site: a place where Londoners and tourists will have a unique opportunity to experience, enjoy and learn about this charismatic Threatened species. We also envision an opportunity to restore the base of the gravel pit into a wetland that would support indigenous plants and animals, including the swallows, that were historically present at the site. We believe our recommendations align with the developer’s stated intention to create a passive outdoor recreation area offering public access to green space. 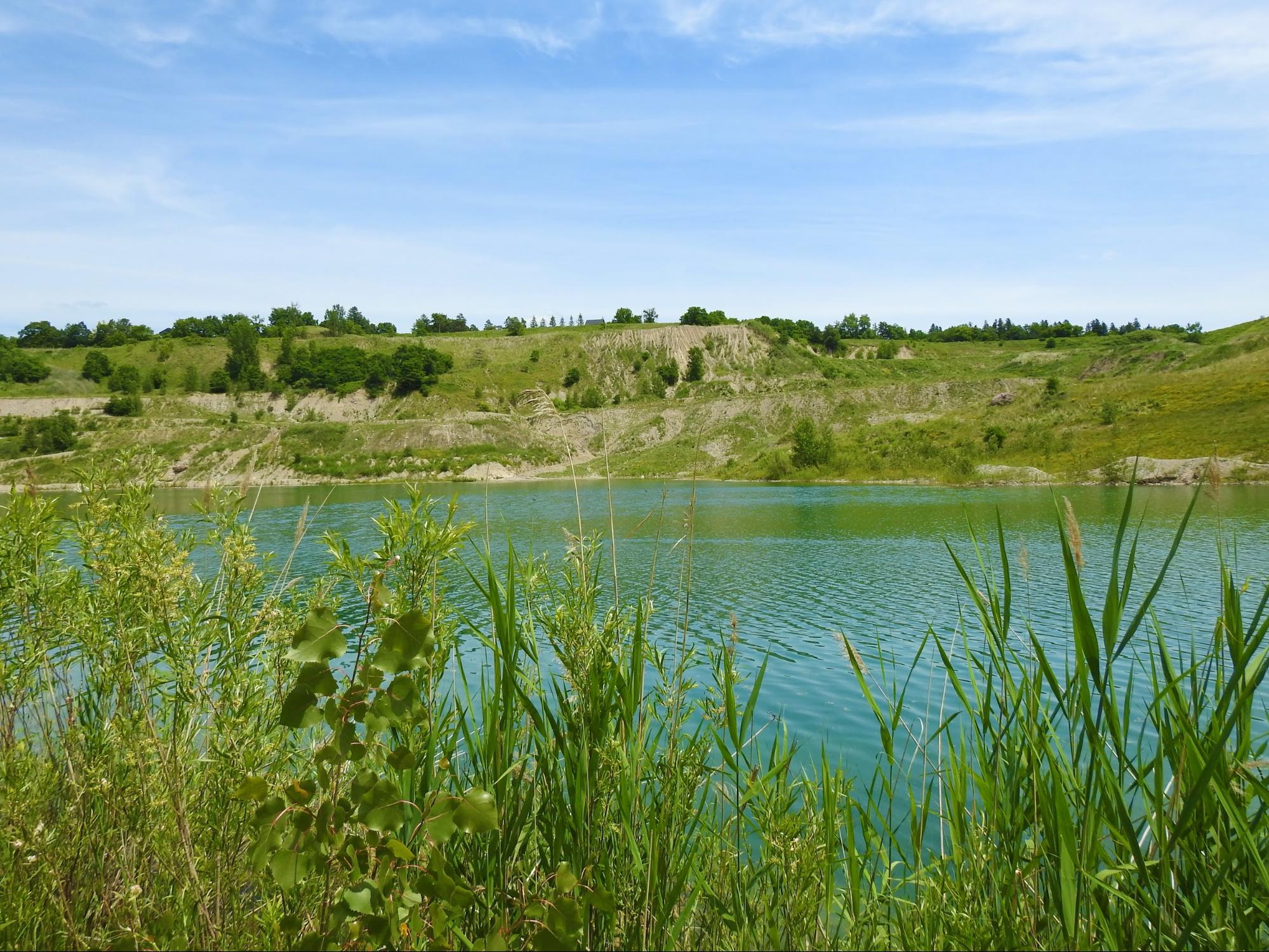 Birds are vital to the health and wellbeing of our ecosystems, providing essential services such as pest control, pollination, fertilization, waste management and seed dispersal, to say nothing of the mental and emotional health benefits of simply enjoying the beauty of a healthy and thriving ecosystem, filled with the rich colours and sounds of diverse bird populations.

The City of London recently declared itself to be a Bird-Friendly City. We believe the proposed mitigation at the Byron gravel pit is consistent with the stated goal of this program: “to create a safer and more environmentally friendly experience for migrating birds.” Accordingly, we are soliciting the Byron and greater London community for support to show the developer that there is considerable interest in preserving the colony in recognition of its heritage value to the City of London and importance to the Threatened local bank swallow population. Ultimately, cooperation from and endorsement by the public is paramount to successful conservation. Indeed, the province of Ontario said it best in their government response statement to the bank swallow recovery plan: “Protecting and recovering species at risk is a shared responsibility.”