In Your Palm: Screening & Discussion 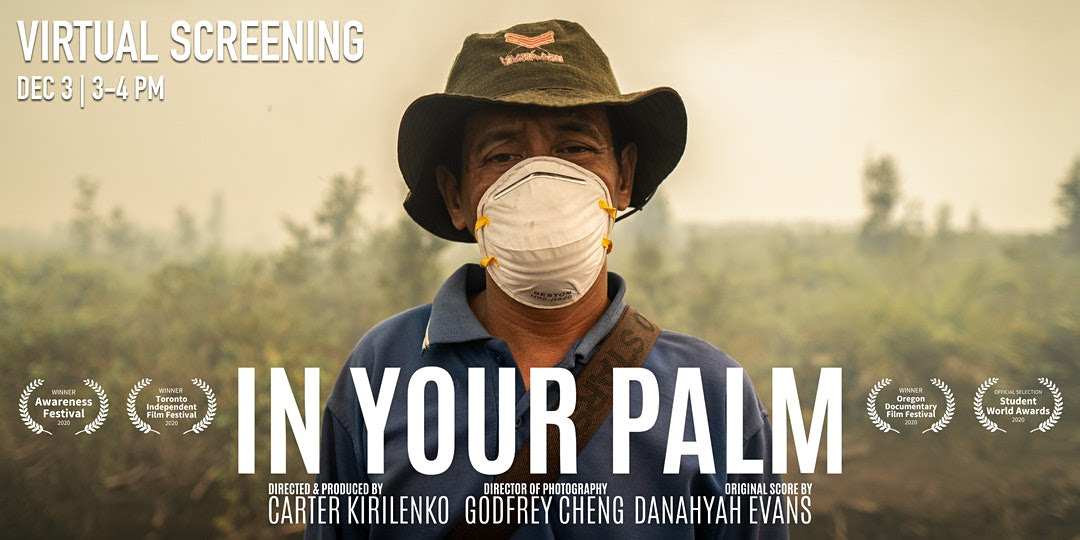 Join us for an exclusive screening and feedback session of In Your Palm with Carter Kirilenko, Director and Producer.

In 2015, Indonesian provinces such as Sumatra and Kalimantan experienced air quality levels that reached 2,000 AQI, which, according to the EPA, is seven times higher than what is considered hazardous for human health. This toxic haze is directly connected to fires burning carbon-dense peatlands in Indonesia, releasing pollutants exceeding the average daily emissions of the entire U.S economy. Just last year, the fires returned - putting the region on the brink of yet another climate and public health crisis. What is causing these fires and why is no one talking about it?

“In Your Palm” is a short documentary film directed by recent UWaterloo graduate Carter Kirilenko - revealing a link between the annual fires in Indonesia and an ingredient that all of us are unknowingly consuming every day: palm oil. Filmed over two years across five countries, In Your Palm shares the harsh realities for local communities living next to industrial-scale palm oil plantations, which intentionally burn vast land to grow the world’s most lucrative vegetable oil.

The film was created by UWaterloo students and went on to win multiple awards at festivals across Canada and the U.S., including the award for best international film at Oregon Documentary Film Festival. In Your Palm was also completed as a capstone project in the Environment and Business program out of the Faculty of Environment.

Join us on Thursday, December 3 from 3:00-4:00pm EST for an exclusive screening and feedback session with alumnus and Director of In Your Palm, Carter Kirilenko.