An Overview of Environmental Engagement in the Budget Process
Over the past two months, staff at the London Environmental Network have engaged hundreds of Londoners in the City's Multi-Year budget. We reached out to the environmental community to get feedback through our budget info session on January 13th which had over 80 attendees, by promoting a City survey and by encouraging Londoners to connect to their Councillors directly and speaking at Public Participation Meetings. The Councillors discussed the budget in depth over 6 days and determined what they wanted to fund from the base budget, provincial downloads and new spending (which they call business cases).

The work that the environmental community did to reach out to Councillors was extraordinary. Both Public Participation Meetings were jam packed (including 2 overflow rooms!) and a large majority of speakers talked about their desire to see climate action in our city. City Councillors spoke about how their constituents have repeatedly asked them for green bins and action on climate change.  Thank you for speaking to your Councillors about prioritizing the environment in this budget cycle! 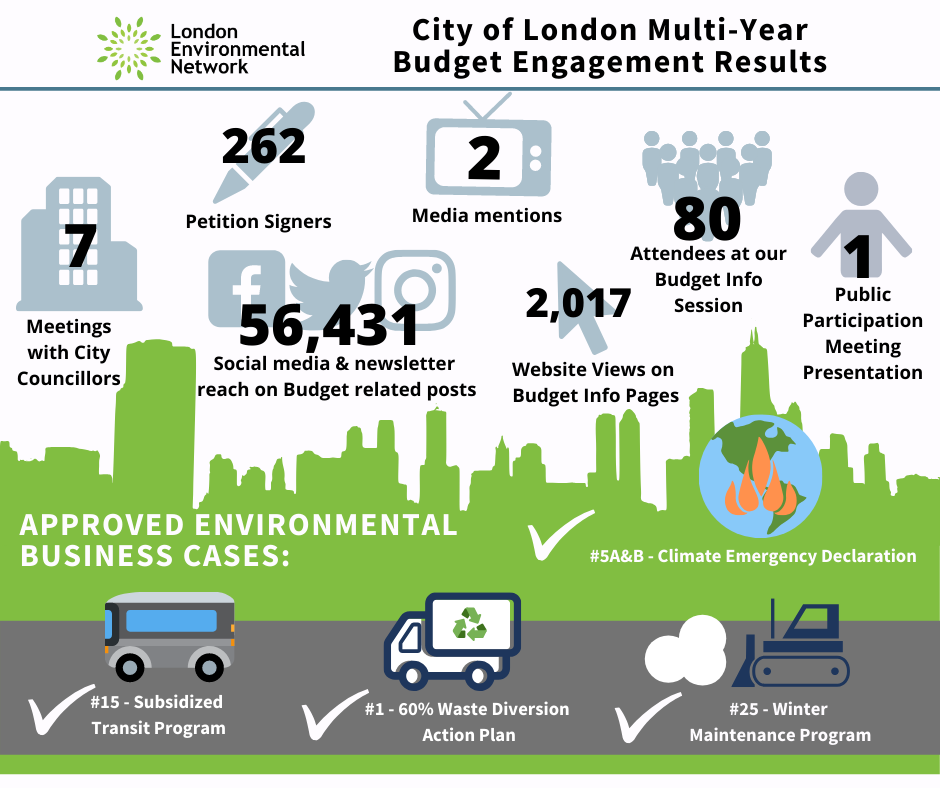 New Environmental Spending (a.k.a Business Cases)
The business cases that the London Environmental Network determined were relevant to the environment and requested Council approved are as follows:

We're going to be honest. We were worried that new environmental spending would not receive funding because this was a tough budget. The Provincial government downloaded a lot of costs to our city and the costs to operate the land ambulances jumped significantly. The base budget alone (normal operating + inflation) was going to be a 2.3% increase. There were also very frank discussions about affordability for Londoners if there were increases to property taxes. But we know that a dollar spent on climate action today saves between $2 to $10 in economic benefits in the future, and this Council decided to stop kicking the can down the road to the next Council.

Council voted to maintain current environmental spending in the base budget (ex. funding for park maintenance, current recycling programs and current staff who work in environmental departments like Urban Forestry and Environmental Programs). They decided to fund 4 out of the identified 5 environmental business cases (deferring Back to the River to a future meeting). We are very pleased to see new funds allocated to the Climate Emergency Declaration as there are a variety of projects outlined in that business case that will help reduce emissions.

It is important that London take action now on climate change. City Council decided to take action by funding a Climate Emergency Action Plan and by funding the subsequent actions. Make no mistake - there is still a lot of work to be done by the City and community to achieve the net-zero goal by 2050, but this is a good first-step forward.

One of the reasons we heard from Councillors and staff regarding why they didn't critically analyze and reduce road widening expenditures in this budget is because they are waiting for the CEET (Climate Emergency Evaluation Tool) to be completed. City staff are still developing and finalizing the CEET, which will be used to review policies, projects and decisions from a climate change lens. The CEET is part of a bundle of actions the City is taking to immediately address climate change, more of which you can read about here. We've heard from Councillors and City Staff that the CEET will review decisions made in the past, including major infrastructure projects, to determine if they are still feasible given the climate emergency. That way, decisions that have already been made that increase emissions can be reviewed and cancelled as determined by Council.

Our friends over at London Cycle Link, the Cycling Advisory Committee, and the rest of the London cycling community advocated strongly for major investments in cycling infrastructure and hiring an Active Transit Manager in this budget cycle. Unfortunately those investments were not made. The cycling advocacy was very impressive and we hope we are close to seeing wins very soon in this area. Stay tuned for a future blog post about how we can save money, invest in cycling infrastructure and change our high-emission road-widening plans.

Overall
Staff at the London Environmental Network were pleased to see new spending on environmental programming and climate action in the 2020-2023 City of London budget. Now it's up to the City and Londoners to implement the actions required to reduce our emissions, and we are excited to help transition to a greener London.

--> Click here to read the next post in this series will explain the two most important ways individual Londoner's can reduce their emissions.