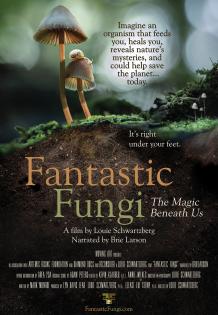 Fantastic Fungi will be playing at the Hyland Cinema from January 3rd-9th, 2020.

Showing times and advance tickets will be available on December 30th online here.

View the trailer for this film here.

"Imagine an organism that feeds you, heals you, reveals secrets of the universe and could help save the planet. Fantastic Fungi is a revelatory time-lapse journey about the magical, mysterious and medicinal world of fungi and their power to heal, sustain and contribute to the regeneration of life on Earth that began 3.5 billion years ago. Better yet, you’ll see it through the eyes of mycologists, like renowned Paul Stamets exing about the unlimited potential of fungi in the fields of food, medicine, expanding consciousness, bioremediation, neurogenesis and treating end-of-life anxiety. And that’s just the tip of the iceberg.

"Mushrooms, it turns out, are just the visible part of an awesome organism known as mycelium, most of which lies below ground. Neither animal nor vegetable, this vast network of cells has been sharing nutrients and forming connections for billions of years, breaking down decaying matter and transforming it into living soil.

Making visible this endless cycle of decomposition and regeneration — and much more besides — Louie Schwartzberg’s lightly informative, delightfully kooky documentary, “Fantastic Fungi,” offers nothing less than a model for planetary survival. Our primary guide to ’shroom splendiferousness is the mycologist Paul Stamets (at one point sporting a Grateful Dead hat), who, vividly assisted by time-lapse cinematography, leads us through fungus-related science, history and even a dash of politics. (As some of you might remember, President Nixon wasn’t a fan of the psychedelic properties of some mushrooms.)

Rounding up a chatty, knowledgeable bunch of fellow fungi enthusiasts, Stamets rhapsodizes over mycelium’s multiple talents. Apparently, it can clean our environment, kill termites and bedbugs, empower our immune systems and, on occasion, help terminally ill people face death. The same variety that may have caused our ancestors’ brains to triple in size (the endearingly named ‘stoned ape’ hypothesis) might also offer future help in the treatment of Alzheimer’s disease.

A charming blend of science and conjecture, “Fantastic Fungi” wants to free your mind. (And maybe your wallet: Stamets sells as well as researches mushrooms.) I could have done without Brie Larson’s cutesy narration, but at least the press notes happily admit the appeal of her million or so Instagram followers — a level of social-media fame scientists can only dream of. And I’m pretty sure there’s a mushroom for that." - New York Times "