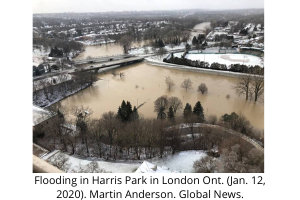 London’s climate is changing. Gradually, the weather is getting wetter, hotter and more severe. Our city is subject to more frequent intense weather events such as flooding, heat waves, severe thunderstorms, ice storms and snowstorms.

This past January 2020, we saw a record breaking rainfall and homeowners facing flooded basements. These extreme weather events will only continue to increase, and London needs a plan (and funding) for climate action in this multi-year budget cycle to address and mitigate these events.

London City Council is about to debate and decide on a new multi-year budget. This is the major finance document that will shape the size and character of our city for the next four years, and the Intergovernmental Panel on Climate Change (IPCC), the highest accepted scientific authority on climate change, estimates that we have 10 years to avoid catastrophic damage.

These next four years are crucial in the battle against climate change.

The new multi-year budget will have a dramatic impact on whether we as a city do our fair share to tackle the climate crisis. It’s all hands on deck, and cities like London have an opportunity to lead the way in the transition to a climate-friendly world. In other words, the new budget must be London’s temporary climate emergency plan (until a final climate emergency plan is published).

Don’t dismay! We have solutions and a clear way forward.

The City of London has several plans in place, but one in particular is called the Community Energy Action Plan which outlines quite clearly the previous targets and actions the City has undertaken to address climate change. They also have plans to create a new Climate Emergency Action Plan for 2020.

The City of London even released a Climate Change Emergency - Update from staff about immediate actions to undetake such as a net-zero by 2050 target, a CEET screening tool (Climate Emergency Evaluation Tool), and advocate to federal and provincial governments for climate action. But all those plans and the subsequent determined actions require funding in order to function.

What can you do to help?

Sign our petition! We know the City of London is leaning in the right direction, but we need to show City Hall how important climate action is to the residents of London and push them to do more. There are lots of business cases in this budget that relate to climate action and we need to let Councillors know how important those actions are. The reality is, if we don’t speak up and tell our political leaders what we want, the work won’t get done.

Sign the petition below to ask City Council to take action on the environment and climate change by allocating funding towards climate action in this year's multi-year budget.